It was definitely on my mind to write a blog about Ahimsa, the first yoga yama (moral restraint )about non-violence.  My mental picture of Ahimsa is to watch the ochre -robed monks sweeping the path before they step on any ants.  Equally as silly and not-of-this-world is the blockbuster film Revenant.  I shall write my critique BEFORE it happens to sweep the Oscars, as it is hyped to do.  For an Oscar, I will give it the music and the makeup/prothetics. But to give a fine actor any kind of tribute for months of personal hardship in the Ultimate Man Cave.  Well, that would be a shame.

Best to read or write this blog from a dark man cave with a couple of cases of beer and a gang of rowdy guys who have just watched marathon NFL tournaments and wish to maintain their high before they pass out.

First to recuse myself as both a yoga teacher and a woman, neither of which is well-suited to sitting through this movie. After the first of the “close your eyes” scenes, it was no longer necessary because the premises were so improbable.

But to get to the details.  First, the geography.  We start in a swamp of some sort and move to other lush green wet ground with lots of moss.  There is only one vague mention of going to “Missouri,”  so its a wonder where we are and where we are going while we move along through mountains and beautiful scenery,  always snow covered and cold but the rivers and ubiquitous puddles never seem to freeze. Nor do 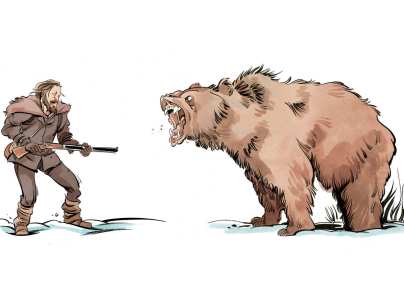 Each mountain range seems geologically different from the one before. We wonder: is this the Rockies? Are they in Canada? Could this be Colorado?  None of these settings seem to be on the way to Missouri from anywhere tropical. Then we have the worst scene of all. Leo is somewhere in his dreams in a ruined chapel with sophisticated Italian style cave paintings on the abandoned walls.  There, apparently, we see him in his transition from dead (or near dead) to ghost –Here is  Revenant of the title: A man returning from the dead to his wife and son who stay in ghost land to help him with his reveries as the film plunges ahead.

An Internet trip to the explanation of the life of Hugh Glass, prototype of this film, tells us HughGlass that he swam from a ship in Galveston Texas ( ok that explains the green swamps) and then moves around the Rocky Mountains and the rugged American West.  In truth, the film credits give homage to British Columbia.  But one is not quite clear whether the Canadians helped by contributing their mountains and snow to the settings in return for the economic benefit.  We see, earlier, that it was created in Australia ( hmmmm was that just editing, which was abundant, or a chance for a travel perk by the actors and crew?), in Montana ( THAT is believable ) and California ( where, no doubt, they went to film the abandoned Spanish chapel and get a hometown rest in Los Angeles).

If I had one question to ask the director it would be this one:  Do you want us to believe, truly believe this happened?  For that there is plenty of evidence: up close suffering shots. live action bear scenes, unwashed uncombed men in the mountains.  On the other hand, perhaps you want us to see this as fiction?  No subtitles to put it in time or in location.

If I had one question to ask my readers: Does it matter — fact of fiction — when it become incorporated in your memory bank and therefore, I suggest, in your daily actions in life? Would you remove even the smallest ant to avoid killing it with your step?
Would you seek revenge with rifle and knife fueled by the power of anger?

In the true story of Hugh Glass, Hollywood Reporter suggests that there was no Indian wife, no murdered half-Indian son, no motive of revenge. On the other hand, this source says it is unforgivable to take from a man, his primary means survival.  His gun.

And so this brings up the yoga concept of Aparigraha, the fifth Yama or moral restraint:

Aparigraha counsels us not to take advantage of a situation, not to act with a motivation for greed. More importantly in my view of today’s material world, Aparigraha is about attachment to our material things. It’s about letting go of our attachments to things because, as the Buddhists, the monks, show us, impermanence and change are the only constants.  Those constants perhaps offer this film a chance for redemption.

What do you think?

For 25 years, a teacher of yoga, mindful meditation, and Ayurveda in Central Pennsylvania. Certified to use Yoga as Therapy for correcting alignment and opening blocks.