This blog was first a thought that would fit under Julian Barnes’ nostalgic title, The Sense of An Ending. His wonderful novella tells of a middle-aged man who has never dealt with his past until presented with an odd situation that obliges him to consider a variety of events he had not thought deeply enough to understand in their time.

And then, my own sequence of events that brought me here, to write on this page, was influenced again by a delightful Cowboy book with a preface extolling the seductive role of an epigraph. (In literature, an epigraph is a phrase, a quotation or a poem that is set at the beginning of a document. The epigraph may serve as preface, summary, a counter-example, or a link to suggest context. The best example of epigraph, she suggests, is Renee Zellweger’s line to Tom Cruise in the movie Jerry Maguire: “You had me at hello.”)

Hold on, I’m getting there.

Here’s the epigram, paraphrased (and altered with my own examples) from Julian Barnes:

You get towards the end of life–no not life itself, but of something else: the end of any likelihood of change in that life. You  are allowed a long moment of pause, time enough to ask the question: what else have I done wrong?…I thought of a wide-eyed woman tasting an orange peel for the first time… I thought of a cresting wave of storm-sent ocean, lit by a full moon…I thought of another cowboy fashioning a toothbrush from a soft branch of tree, around a remote campfire. 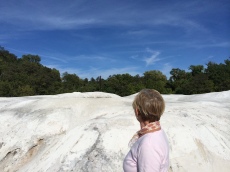 There is accumulation. There is responsibility. And beyond these, there is unrest. There is great unrest.

For 25 years, a teacher of yoga, mindful meditation, and Ayurveda in Central Pennsylvania. Certified to use Yoga as Therapy for correcting alignment and opening blocks.